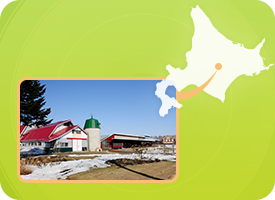 The first region we visited is Tokachi. Known as Japan’s foremost food production area, the vast, fertile plains of Tokachi are home to fields of crops such as potatoes, wheat, and soybeans, as well as fields of animal feed such as dent corn, and pastures. Tokachi is also where Yotsuba Milk Products Co.Ltd. first began its operation.
On this occasion, we visited Daizou Dairy Farm, a dairy agriculture operator in the township of Shikaoi, located in northern Tokachi. Beyond the stylish red-and-green painted cattle barn lies a magnificent background of mountain after mountain, continuing to the Daisetsuzan Volcanic Group.
Day-to-day farm work is performed by the farm staff consisting of father Masaichi Daizou, his wife Setsuko, their elder son and third-generation proprietor Makoto, their younger son Ryotaro, and their employee Takahashi. On that day, Setsuko and Makoto showed us around.

The entire family lovingly cares for each and every cow 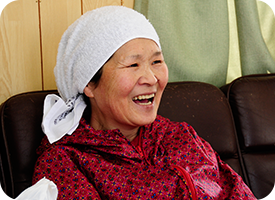 “Be gentle to the cows. That’s our farm motto,” say the two in unison. That would explain why all of the cows remain so calm, even with strangers such as ourselves paying a visit to their barn. Not showing any alarm at our presence, the cows lie down and carry on with their rumination.
“Even while milking, you must never become upset with a cow. We’re mindful to always treat them gently. I think that being gentle helps to develop a cow’s affection for people and calm personality,” remarks Setsuko. When experts on cattle temperament visit, they are often amazed at the excellent behavior of the cows at Daizou Dairy Farm.

Also, while ranch-born calves are often sent to other Dairy Farmes as part of their upbringing, Daizou Dairy Farm raises its calves entirely within their own land. “By knowing our cows for their entire lives, we can soundly manage their health, and it gives us peace of mind as well.” Each cow is individually managed by the staff’s own hands. This is the basic principle of Daizou Dairy Farm. 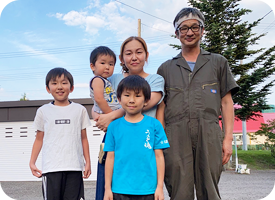 The Daizou Dairy Farm Family (The proprietor, Makoto, on the right)

The Daizou family also told us about the vital importance of feed management in maintaining cattle health. “We harvest our pasture grass when it is at its maximum nutritional value, and use it to make delicious feed. We also produce 100% of our own silage. We think that these are our advantages.” Makoto speaks of the hard work of harvesting pasture grass in summer. The large agricultural machinery is used jointly with several other like-minded dairy producers, as they work in cooperation with one another.

That’s why they focus their efforts over a short period of time, making it possible to harvest their pasture grass at its very best. “Eating delicious pasture grass contributes to the cows’ health, and healthy cows will produce plenty of excellent raw milk. What’s more, they’ll require less care down the line.”
Just like for us humans, health comes first for cows, too. Excellent raw milk is the starting point to produce delicious milk and dairy products. 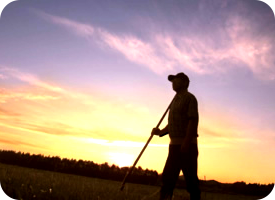 Since my father’s time, Daizou Dairy Farm has operated in cooperation with Yotsuba Milk Products Co.,Ltd., said Makoto.
Makoto feels that it is his role to keep Daizou Dairy Farm on the path to success, despite the challenges of the times.
“Dairy producers and Yotsuba Milk Products Co.,Ltd. are united, to deliver delicious milk to our customers. And, I believe it’s important to carry this philosophy forward.”

As we work on the pastures and milk their cows, our dairy farmers always think of the scenery of which dining table where the milk was delivered. And, whenever our customers drink delicious milk, they always think of the scenery of a dairy farm in the distance. Yotsuba Milk Products Co.,Ltd. becomes the bridge connecting these two scenes, creating a path for success even in these challenging times. 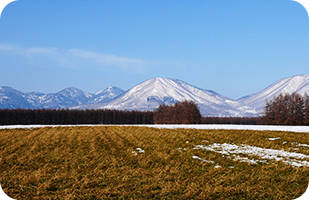 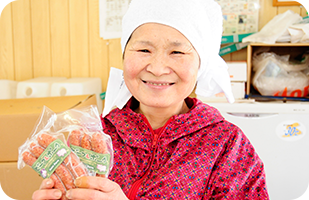 “This is my hobby!” With a beaming smile, Setsuko shows us meat products made from cattle she has personally raised, which are sold in Shikaoi Town as local specialty product. 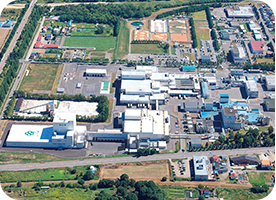 This factory site is located in Tokachi, the region where Yotsuba Milk Products Co.,Ltd. first began its business. The versatile facility, which consists of a dairy processing factory, a commercial milk factory, and a cheese factory, produces a wide range of products such as milk, yoghurt, powdered milk, butter, and natural cheese. 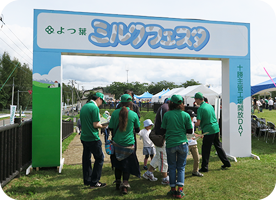 The Yotsuba Milk Festa is held in autumn every year. This special celebration features booths from Japan Agricultural Cooperatives (JA) Dairy Farmes throughout Tokachi Subprefecture. With treats such as dairy products and soft-serve ice cream available for purchase, the festival also includes a variety of fun activities that everyone can take part in, such as lucky draw. This event is also very popular among local families, drawing around 10,000 people over the day.
※Cancelled in 2020 due to Coronavirus Covid-19. 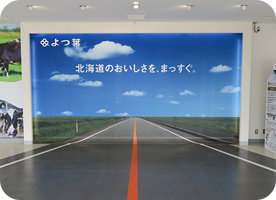 Located within Yotsuba’s Tokachi Main Factory, the ‘Oishisa Massugu Kan’ educational facility offers tour courses, which last about 60 minutes. Through glass panels, visitors can observe parts of the processes for dairy products, such as milk and butter. This is a great opportunity to learn about Yotsuba’s delicious products and the dairy industry in a fun environment. Both individual and group educational tours are available. Tours require advance reservation by telephone.
※Currently closed in (2021 January)

In March 2013, Yotsuba began using LNG. LNG is LIQUEFIED NATURAL GAS which produces less carbon dioxide emissions compared to coal, heavy fuel oil, and propane gas such energy source that contributes to the suppression of global warming. Dairy farming in Hokkaido is only possible because of its bountiful natural environment. Therefore instead of conventional C heavy oil, LNG is introduced as the heat source.